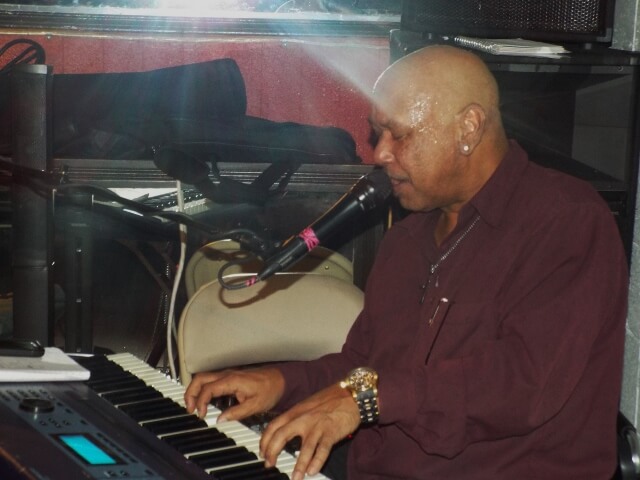 “I love music. I breathe it”

He’s bigger than life itself! He has been born with the talent of producing melodic and rhythmic blueprints throughout his hands, his fingers to be more precise. This Cat is all Blues, R&B, Funk and any other genre of music that you want to hear Bob Jones style! He’s had a lot of practice. He began his musical adventure at the age of 13 but he was a singer. He grew up in a house with four sisters, one was a nurse and three that sang in their own Trio called “Brown Suga”. Connie, Andrea and Kita and being the baby boy, all that natural talent trickled down.

In Junior High School, Bob had a friend teach him two chords, C minor and F major and a blues scale and begin playing the keyboard at 14. “After that I couldn’t stop playing, it just took me over”, said Bob reminiscing. He formed a band with some older Cats when he was in high school. They called themselves the Chameleons and begin playing at a local bar around the corner from his house where he grew up in San Jose, he was about 17 at the time. The Chameleons turned into a real band and they began touring for a while. After returning home, Bob attended college got his AA degree in Electronics and begin building Synthesizers. Short time later he was back on the road again with a new band called “The Real Thing.”

He grew up playing R&B music in the 70s and went on to play USO tours. One gig he was supposed to go to Las Vegas for three months and ended up staying there five years. He became the musical director for Temptations Motown Review produced by Class One with Chester Davis singing lead vocals and it ran that length in time. He’s travel to Europe, Australia, Japan, Hawaii and Canada throughout his musical career.
Bob has performed with some great local and mainstream artists such as Alvon Johnson and Skip Rice, the bass player for Sherry Gordy Presents. Played down in Mississippi on tour with BB Coleman (One Eyed Woman), Chick Willis (Stoop down Baby) and he opened for BB King and Kris Kristofferson.

Bob loves the music. He said he can’t help it. The music chose him.
Growing up in San Jose and being around the lot of San Jose musicians, he was the kid always wanting to learn. “They helped me a lot. I used to hang around all the old guys. I played with the older guys because music back then wasn’t a competition, it had no competition aspect to it. Everybody was open to each other.”

Bob Jones and The Chosen Few
His current adventures with Duane Brown, Tim Baker and Eric Everett over at JB’s Lounge, has created some great musical grooves that cannot be duplicated. Along with Pancho Small and Jos? Hernandez, these Cats get in a groove and zone everyone else out and only focus on the music. They watch, they listen and with every song they play they’re writing their musical dialogue with one another. That is always a treat for the audience as well as the Players. Bob loves that his music is used for the edification of others and he loves a good groove. These Cats, The Chosen Few alongside Bob have created a musical unity.

Moving forward into 2017, Bob doesn’t look back. He’s always looking at what he’s doing now. With his current Engineering classes, he’s concentrating on remastering and creating a more professional sound and tapping into some of that old jazz like “A Night in Tunisia” and some of the old great classic jazz and he’s even going “LIVE” this year.

Bob Jones has traveled and performed with many renown artists over the years. He has added his musical flavor on many recorded CDs and he has “Polished” his craft. He has now become a renowned artist himself.

Catch Bob Jones and The Chosen Few every Sunday afternoon for the “Sunday Soul Jam” at JB’s Lounge. A place where the Players can come and play and the Singers can come and sing
9777 Lincoln Village Dr., Rancho Cordova, CA from 5 PM till 8 PM.