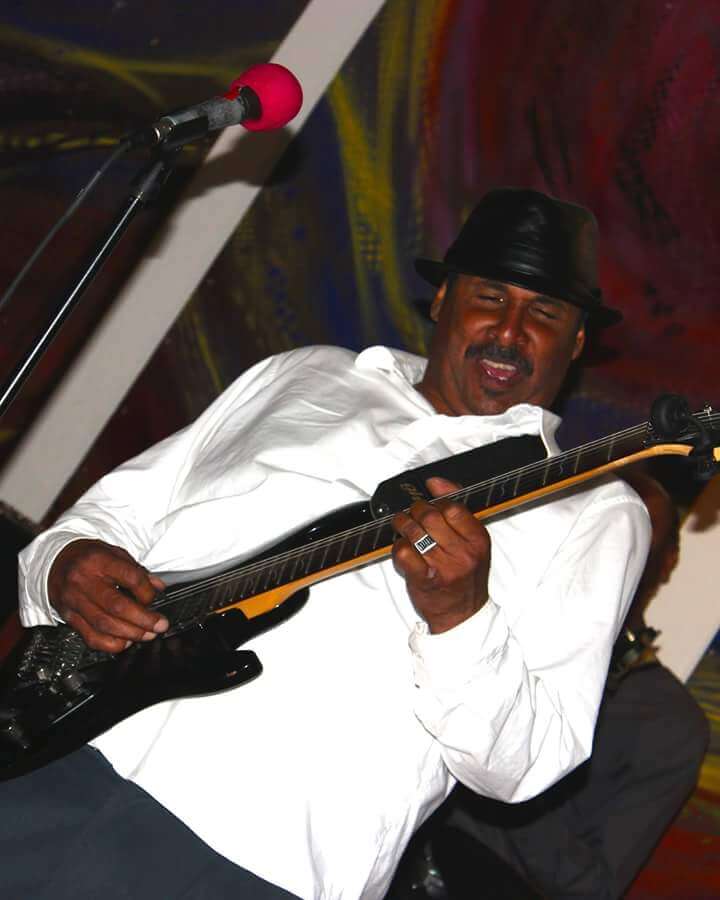 He has three different names; Trappy Trap when he’s being Sexy, they call them Arizona Red when he’s playing the Blues, and they call them Kevin when he’s in Church. He’s from an ancestral line of musicians from New Orleans, although no one in his immediate family plays music.

He’s a funny guy and he jokes about being born with a guitar in his hand. He asked for a drum set when he was seven or eight years old for Christmas one year, but his mother bought a guitar instead. “She was smart, plus I didn’t have any rhythm anyway”, Kevin said jokingly. By New Year’s of the following year, he’d already learned his first song on the guitar. He doesn’t know where the gift came from and he’s not trained in music but he does know that it is a God-given talent.

“I just hear the music, I dream music”.
His first gig was at 16, and the high school graduation dance, they had a group called The Soul Patrol. They were so excited that after packing their gear on the truck for the gig, the driver took off and Kevin fell off the truck and got hurt. His best friend, Rodney Purdy went and got his mother she put some blessed oil on him and said a prayer and he was alright. It turns out that Rodney’s mother is also Kelly Purdy’s (Stixx) mother, and they all grew up together. “Back in those days, every street had a band so every week there was a Battle of the Bands in the neighborhood”, said Kevin reminiscing. There were Battle of the Bands with Sheraton Street against 6th Street, Sheraton Street being the place where Con Funk Shun used to practice and they were a big influence to everyone that played. Danny Thomas is a good friend and at that time Kevin was learning so they let him come to a rehearsal, and they gave him a guitar in the wah wah pedal. It’s all he could do was that one note and hit that wah wah pedal. “After that, I knew I wanted to wah wah the rest of my life”, Kevin said.
His mom took the whole band, The Soul Patrol, to the Jackson 5 concert at The Circle Star and it was all over for him, he knew for sure he wanted to be an entertainer.
“I don’t have to be famous but I just want my music to be heard. I have something to say in my music and right now I’m on this change the world, help somebody, all love peace and joy music”, he added. He writes love songs as well, and his love songs are more written for couples in love. “My father used to tell me “if you love her, love her”. Kevin wants for his music to reflect what he feels inside and because of the personal sacrifices he has had to make, he plays his music every day. Riches not being his goal for the music, but to be heard and to be an inspiration to others through his music.
As a young adult he worked for father and his grandfather for a while but he couldn’t put down that guitar. His love for music so strong that he took his guitar with him everywhere he went and he still takes the guitar with him everywhere he goes.
Kevin is been performing around town since moving to Sacramento in early 2016. He was only to be here on a visit but because of the unity and the support of the local artists in Sacramento he decided that this is where he wanted to stay. He has worked with some great local artists since he’s been here, Rashaad Carlton, Rick Warren and Ronald Matthews. He has also performed at The Black Expo 2016 and at the Liaison Lounge.
After performing and living 25+ years in the Bay Area, he brings to Sacramento a mixture of music that is sultry, jazzy and bluesy. He is a songwriter and a producer and works attentively in his studio, which he describes as “stepping back into 1972″and he loves it.
With a new view, he’s able to get back to his songwriting and releasing his soul through his music. Although he loves performing, it’s a time in his life now where he wants to focus more on writing. Kevin wants to give the newer singers an opportunity to perform songs he has composed. His songs are thought-provoking & everything he writes and everything he sings is to promote a change.
He has powerful management in Rena Young. She’s been knocking down doors and getting it in. She has been his right hand since starting his music venture here and has been working diligently for opportunities and different platforms throughout Sacramento.

Kevin is a good entertainer, his music has distinguishing characteristics and his musical awareness is broad. His fan base is rapidly building has he performs more around the Sacramento area. We look forward to seeing more of Kevin performing this summer.