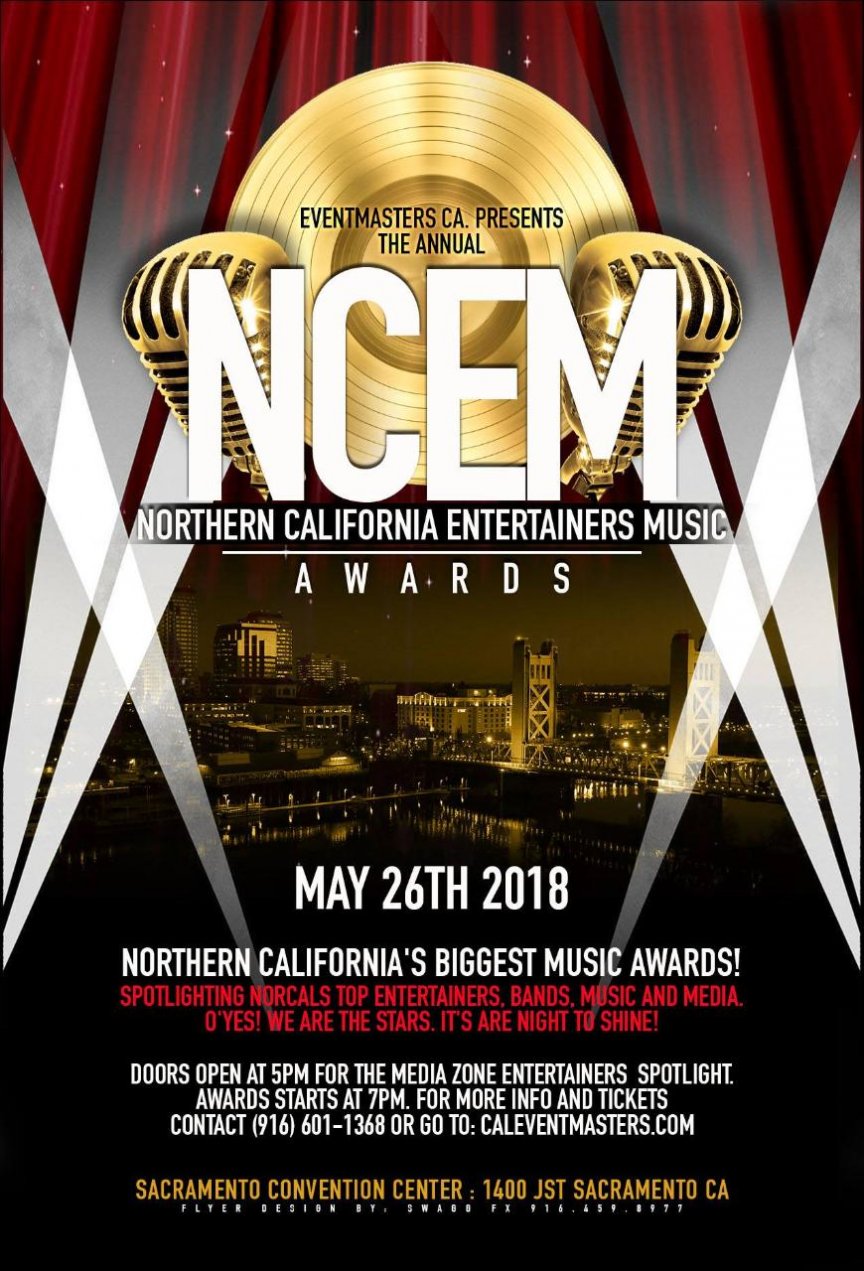 The Northern California Entertainers Music Awards 2017 presented by Alex Eventmasters Daniels and his better half Mrs. Tisha Daniels was once again a great event. This Dynamic Dual, and tireless supporters of the local artists, has done a great job with this year’s award show. The stage was set. It was all brand-new from last year show, and even better! White linen curtains and enormous letters, an acronym for the show, adorned the stage. It was a great setting for what was about to come. Some of Northern California’s greatest local artists from Sacramento, the Bay Area and there were some new transplants to California in the building as well. Yes Alex and Tisha put on the Ritz! The red carpet was all a buzz as all the beautiful people started to fill the Crest Theater. UB Media, KLJN Radio (Lady Jazz the Queen), YAL Radio (Yolanda Littles), as well as Alex Eventmasters worked the red carpet to meet and greet you. There were some great local celebrities in the house that stopped by our Red Carpet Booth and took pictures with us. Big Mike Hart, Gloryboy Josh and Nina Causey just to name a few stop by to say hello.
Everybody looked so beautiful all dressed up and adorned in their gowns and their best dressed for the event. The atmosphere and vibe was exciting and invigorating.
Terry Moore of T-Mo entertainment was a gracious host for the show along with some great presenters, Shadia Powell, Nina Causey, Sir Charles Swain, LadyJaz and even UB Media presented the Male Blues Artist of the Year award. Le’le open this year’s show with a bang and had the crowd on their feet. Then came Tey Yaniis and finished rocking house out! Melanie Brantley, her tribute to Whitney Houston, Tommy Hillard his tribute to Barry White and Kingdom, his tribute to Bobby Womack, made the show superb. All the artists that participated in this year’s show were absolutely amazing.
There were so many outstanding and phenomenal artists from the Bay Area as well as Sacramento that attended & the all the performances were great that is just too many to mention. You just had to be there, you had to feel the excitement for yourself. Some of last year’s winners and nominees were in the house, Rashaad Carlton, Shawn Raiford, Raymond Coats & Jayna Blackwell as well as some new faces, Levi Moses, Gloryboy Josh & Papa’ Dmac & Armani Stanford-Wyse. Yes it was a great night! The only thing I can say that will top that is NEXT YEAR’S SHOW!!!