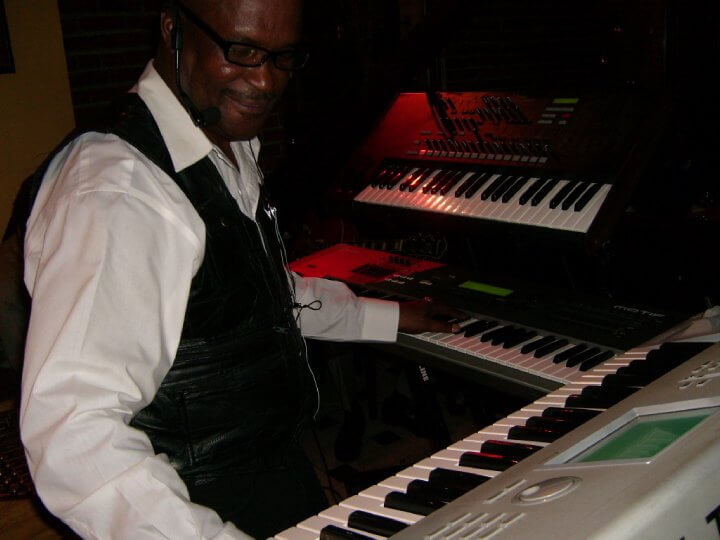 “JUST DOING WHAT I DO”.
Ronald S.L. Matthews, Musician Extraordinaire. Keyboard player, flutist, singer, photographer, cook, and world traveler. Truly a Man of many talents. A transplant here in Sacramento from the Bay Area, born in San Francisco raised in Oakland. With a music career that spans more than 20 years, he is Extraordinaire.
When he performs as “Musician Extraordinaire,” he is a One Man Band. His playing skills surpass ordinary musician performances. A multi-instrumentalist playing 3 keyboards all the while singing lead and background vocals integrated with a little flute just to give flavor to the music. His music style ranges from Funk, R&B, Jazz, Top 40 and dance music. In addition to restaurant & club performances, he performs private parties, weddings, bar mitzvahs, receptions, picnics, and events in parks during the summer from Sacramento to the Bay Area. Locally he’s performed at Liaison (Arden Area), Brick House (Old Elk Grove), Graciano’s (Old Sactown), Bella Blues, and End Zone to name a few venues. In the earlier days of his career, Ron relocated to Reno in 1975 and created a band called Fresh for 10 years before moving to Los Angeles in 1985-’86. While in L.A. he played with Best Of Friends, traveled to Japan and stayed for four months. While in Japan, he met fellow musician Brian Copeland “Bsaxc” of Fresh and Hot from Oakland. Ron has also shared the stage with well known local artists, Shawn Raiford, Carla Lawrence, Lenois Louis, Kevin Cain, Robert Scott, Jr., Butch Coles, Robin Joy, and Bryan Hill with the Isley Brothers Tribute Band. Ron’s celebrity performances throughout his musical have been with great names as Lydia Pitts, B.B. King, and Cold Blood. Currently with Kenny Bolds Armann Robb, Kelly “Stix” Purdy, known as Serious Licks.
The Story of Serious Licks
About 20 years , Ron and two other guys were trying to put a band together in Oakland . One was the manager and played bass, the other was a guitar player. One day during practice, the guitar player was messing around playing licks, one of those licks resonated , and that is how the name originated. When they would travel to Reno to perform, venue owners wouldn’t advertise their name because Serious Licks was too suggestive and the term couldn’t be used on the radio. Ron explained to her that was a musical term. ( From that point it became a joke for the bass player. Every time they gave out at card that read “Serious Licks” they would get the same reaction and he would tell them “and they play music too!”)

UB Media:Tell us something that would surprise your fans.
Ron: This might surprise you. I hesitate sometime to tell this but I’ve been around a long time on the planet, I’m an atheist.
UB Media: Now that you are here in Sacramento and you have gotten to know some of the local artist how important is it for you that they all come together and represent unity?
Ron: Different people are doing different things here and there. Some do not mind telling where they play so I can support. Some think you’re trying to get them booted out and take work. There are seven days in a week and there are a million places to play. I can only play one day at a time. That might be a good thing for someone to have something to see like UB Media to find venues and promoters to connect with. I think we need to work on that.
Since being in Sacramento he’s had the opportunity to perform for organizations like the NAACP during the Miller Park Rhythm & Blues Festival and has been the opening act for many local groups. For 2016 Ron is currently working on new and original music and looking forward to working with venues around Sacramento and the surrounding areas. Ronald Matthews can keep you on the dance floor! He also enjoys being his own photographer. Once you’ve met Ron, he’s sure to get your pic.