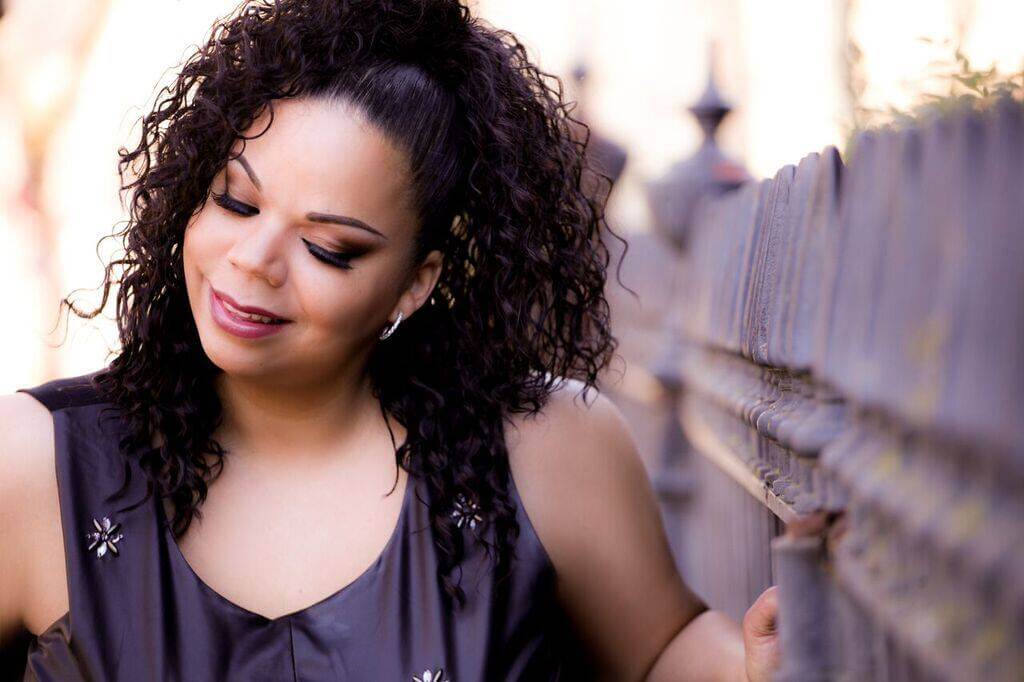 She is of a gentle quality. You can tell upon meeting her that she’s a kind and genuine person.
Ladies and gentlemen ? Mz. Tanice Jay

Tanesha grew up in Tracy California, she grew up in what she calls a “blended family”, her father African-American, her mother white and Portuguese, so their house was a “little crazy”, she said laughing. She grew up with a lot of cultural diversity and a wide range of exposure to music. From southern gospel, and she describes it as “picky pick” southern gospel, to opera, Latin, rock, soul, R&B and funk because everybody in the household was from a different background. Her mother sings and plays the piano, her grandfather and grandmother both sing and she plays the piano. Her father played multiple instruments, but he was not a singer. Tanesha herself plays the piano, flute, and violin. Even though she plays multiple instruments she chose to use her voice, the other instruments are to accompany her voice.” Being a vocalist is my instrument of choice”.

Tanesha’s parents divorced when she was still fairly young, and her mother raised her and her brother alone. There were tough times during that period of her life but she knew there was always “saving grace” in her life. Actually, that’s what drew her into the church and she got hooked on the choir and the music. “I was going to every choir rehearsal. Adult choir rehearsal, youth choir rehearsal, worship ministry team choir rehearsal and that’s what kept me out of trouble,” stated Tanesha. “I really could’ve gotten into some trouble, because Tracy is bordered by Stockton and the Bay Area. And there’s plenty of opportunities to get out there and get into things that you have no business”. Her mother worked long shifts, she was a correctional officer and that gave her every opportunity to do what she wanted when she wanted. But she chose the music, and it helped her to focused at school. She took up music and drama and describes herself as a nerd. She had braces and funky hair and said she really didn’t know how to dress yet and she didn’t wear makeup. But she stuck with the music and the drama classes and it’s indescribable how it has impacted her life.

“Without those things in my life I’m not sure if I would’ve made it. Between getting bullied at school, and didn’t fit in maybe because I was too light or not dark enough. And if your hair was curly you had to be a stuck up snob and I was heavyset and I was not popular for that. But having music as a sanctuary at school, at home, and at church, it gave me something to hold onto and I knew I could get through things”.
Even now she will write in her notebook or shall play her piano, just letting everything that she has out through music.

She is very close friends with singer Iris Joy.

She actually performed in public for the first time at the age of three. At church with a microphone in her hand she sung “He’s Still Working On Me”. “I was scared to death. I remember it seemed like there were 20 million people there. At the age of six she started playing the piano by ear. That skill grew over time and she began playing to accompany herself. She was encouraged to continue her singing career. Her family and friends knew she had a special voice and it was something different. “I felt like my voice made me something more than when I was just by myself. And people looked at me differently when I would sing. When you sing in the church, it is all about ministry. And when you see the people crying, and their moved by what you’re singing I discovered I can do that outside of the church with other songs that I pick or that people would ask me to sing”.

She began classical training when she was in the sixth grade until she graduated high school. Pamela G. Wentworth was her music teacher in Tracy. She was well-versed in jazz to opera. Upon graduation she attended San Jose School Of Music for three years. Once she finished in San Jose she decided to put her voice to work in different bands and she performed when she could wherever she could.
During the time she lived in Oakland, she performed at a small venue called “Sweet Jimmy’s”. She knew the owner and she would bring her keyboard in and perform during the dinner hour. But she must admit she feels very vulnerable when she’s just performing alone with her keyboard and describes it as a little scary. An interesting thing about Tanesha, is that she is nervous every time she hits the stage. Most people don’t know, although she seems very outgoing, she is very shy.

Family Matters
Anthony Hosea Jackson, he’s five years old and her one and only. She calls him her miracle baby and credits him for saving her life. Shortly after his delivery she was diagnosed with cancer, and if it had not been for his birth, she would not have known. He’s her world and her everything. “He sings and he can harmonize and likes to play the drums on everything”, laughs Tanesha. He also attends rehearsals with her.

Tanesha loves her freedom as an independent artist. She always makes sure that she is available if any of her co-artist need her. She loves being able to participate singing background or playing the keys with other artist. “Everybody’s gift is special, I love what other artists can bring to the table. You have to be secure in your own gift and know that nobody can take that from you. God gave that to you when you were born and it’s not something that we own. I don’t feel like I own my gift. I feel like I was blessed with a gift. But I don’t think it’s mine, I’m just a vessel for it”.
She gives a lot of rave reviews to Damond Owens (Sexy B4 Dawn) , Liaison Lounge, and Shawn Raiford (Jammin On The Delta King) for giving local artists, as well as herself the opportunity to showcase their talents in and around Sacramento.

In 2011 she opened for The Dramatics. That was her first and largest artist opening, along with O’dell Ross and The Hot Sauce Band. “That was amazing, because when you open up for people that have been in the business for decades, it’s awesome to have them walk up shake your hand and say “gosh you have a little voice on you lady”, it’s just an amazing experience”. She has also opened up for Dwayne Wiggins, Chico DeBarge, and Suga-T as well.

Tanesha selects her music for her performances personally. “I really try to pick songs that I can connect with that represents some piece of me. So that when I’m doing a performance, I’m giving pieces of myself away to my audience”.
Her lyrics include love circumstances, overcoming hardship and songs that are fun to get up and dance to. She stays away from songs that she wouldn’t want her five-year-old son Anthony listening to. Music, Class and Style is her motto and she’s walking out that dream of being a classic, classy artist. “I don’t want to be popular for being trashy, I’m not on the sex sells boat”. She grew up watching “The Greats”, Aretha Franklin, Patty Labelle, Gladys Knight, and Dionne Warwick. When they stepped on stage they exuded elegance. “And yes they were divas, but not in a bad way. They demanded respect when they stepped on that stage”. So when she selects her songs, she chooses it with those divas in mind and what kind of message she wants to send to her audience about life. She wants to make sure that when her audience walks away from one of her performances, they have a good idea of who she is. “When I choose my songs, they are about how I live. How I get through things, and how I love. They won’t get anything different from me when talking to me from across a table, then they’re going to get the same from the stage.”

She loves participating in events that benefit others. Performing for charities such as, Artists For A Brighter Future, Supporting The Youth Through Scholarships and Sistahs’ Rock, a fundraiser for scholarships, scheduled for April 23, 2016, gives her enjoyment giving back to the community.

Tanesha is currently writing and recording new material. She is scheduled to release an EP in the near future of 2016, but has an open schedule for performances and events.